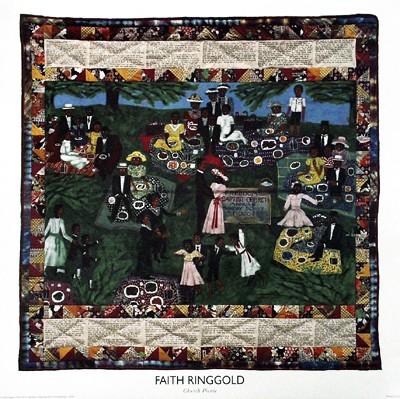 Faith Ringgold, painter, writer, speaker, mixed media sculptor and performance artist lives and works in Englewood, New Jersey. Ms Ringgold is professor emeritus at the University of California, San Diego where she taught art from 1987 until 2002. Professor Ringgold is the recipient of more than 75 awards including 22 Honorary Doctor of Fine Arts Degrees. She has received fellowships and grants that include the National Endowment For the Arts Award for sculpture (1978) and for painting (1989); The La Napoule Foundation Award for painting in France (1990); The John Simon Guggenheim Memorial Foundation Fellowship for painting (1987); The New York Foundation For the Arts Award for painting (1988); The American Association of University Women for travel to Africa (1976); The Creative Artists Public Service Award for painting (1971). Ringgold’s art has been exhibited in museums and galleries in the USA, Canada, Europe, Asia, South America, the Middle East, and Africa. Her art is included in many private and public art collections including The Metropolitan Museum of Art, The National Museum of American Art, The Museum of Modern Art, The Solomon R. Guggenheim Museum, The Boston Museum of Fine Art, The Chase Manhattan Bank Collection, The Baltimore Museum, Williams College Museum of Art, The High Museum of Fine Art, The Newark Museum, The Phillip Morris Collection, The St. Louis Art Museum and The Spencer Museum. Ms. Ringgold is represented by ACA Gallery in New York City. Ringgold’s public commissions include; People Portraits, 52 mosaics installed in the Los Angeles, California, Civic center subway station (2010); Flying Home: Harlem Heroes and Heroines, two 25 foot mosaic murals installed in the 125th street Subway station in New York City in 1996; The Crown Heights Children’s Story Quilt featuring folklore from the 12 major cultures that settled Crown Heights is installed in the library at PS 90 in Crown Heights, Brooklyn and Eugenio Maria de Hostos: A Man and His Dream, (1994) A mural celebrating the life of Eugenio Maria de Hostos for De Hostos Community College in the Bronx is installed in the atrium of the college. Ringgold’s first published book, the award winning, Tar Beach, “a book for children of all ages”, was published by Random House in 1991 and has won more than 30 awards including, a Caldecott Honor and the Coretta Scott King award for the best illustrated children’s book of 1991. The book, Tar Beach, is based on the story quilt Tar Beach, from Ringgold’s The Woman On A Bridge Series of 1988 and is in the permanent collection of the Guggenheim Museum in New York City. HBO included an animated version of Tar Beach in “Good Night Moon and Other Sleepy Time Lullabies.” This program runs periodically on HBO and has been released as a DVD. Ringgold has completed sixteen children’s books including the above mentioned Tar Beach, Aunt Harriet’s Underground Railroad In The Sky, My Dream of Martin Luther King and Talking to Faith Ringgold, (an autobiographical interactive art book for children of all ages), The Invisible Princess, an original African American Fairy Tale based on the quilt Born in a Cotton Field all published by Random House. If a Bus Could Talk; The Story of Ms. Rosa Parks won the NAACP’s Image Award 2000 and is available from Simon and Schuster. O Holy Night and The Three Witches, and Bronzeville Boys and Girls are from Harper Collins. Faith Ringgold’s latest children’s book is Henry O. Tanner: His Boyhood Dream Comes True published by Bunker Hill Publishing. We Flew Over the Bridge: The Memoirs of Faith Ringgold, Ringgold’s first adult book was published by Little, Brown in 1995 and has been re-released by Duke University Press.