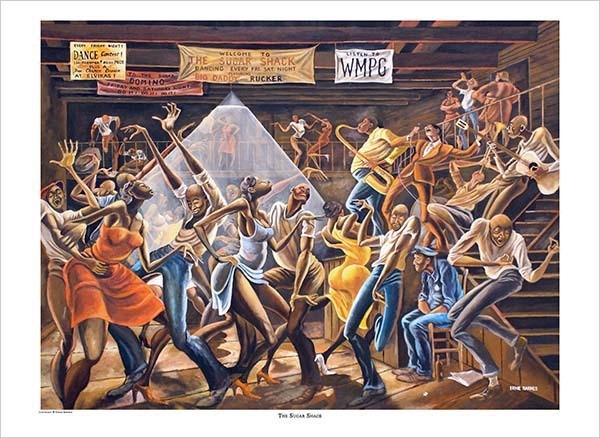 According to Barnes, he created the original version of Sugar Shack after reflecting upon his childhood, during which he was not “able to go to a dance.” In a 2008 interview, Barnes said, “Sugar Shack is a recall of a childhood experience. It was the first time my innocence met with the sins of

dance. The painting transmits rhythm so the experience is re-created in the person viewing it. To show that African-Americans utilize rhythm as a way of resolving physical tension.” The Sugar Shack has been known to art critics for embodying the style of art composition known as “Black Romantic,” which, according to Natalie Hopkinson of The Washington Post, is the “visual-art equivalent of the Chitlin’ circuit.”

On the original Sugar Shack, Barnes included his hometown Durham, North Carolina radio station WSRC on a banner. He incorrectly listed the frequency at 620. It was actually 1410. Barnes confused what he used to hear WSRC’s on-air personality Norfley Whitted saying “620 on your dial” when Whitted was at his former staion WDNC in the early 1950s.

During the Motown 25: Yesterday, Today, Forever anniversary television special on March 25, 1983, tribute was paid to Sugar Shack with a dance interpretation of the painting. It was also during this telecast that Michael Jackson introduced his famous “moonwalk” dance.