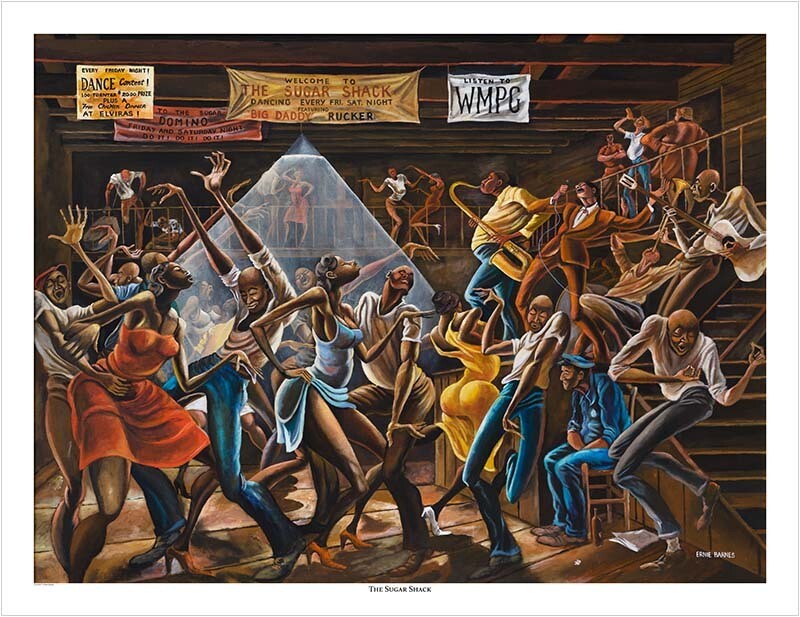 Ernie Barnes’s ‘Sugar Shack’ Painting Brings Big Price at Auction
An iconic image sells for $15.3 million at Christie’s to Bill Perkins, an energy trader, who says he’s been waiting his whole life to buy that work of art.

Ernie Barnes’s most famous painting, “The Sugar Shack,” an exultant dancing scene that was featured on the cover of Marvin Gaye’s album “I Want You” and during the closing credits of the TV sitcom “Good Times,” sold for a whopping $15.3 million at Christie’s 20th Century auction on Thursday evening to the energy trader Bill Perkins. It was 76 times its high estimate of $200,000.

“I stole it — I would have paid a lot more,” said Perkins, 53, in telephone interview after the sale. “For certain segments of America, it’s more famous than the ‘Mona Lisa.’”

Though based in Houston, Perkins said he did not want to risk being on the phone, so he flew to New York City with his fiancée, Lara Sebastian, to attend the sale in person. He was worried that he might be outbid by someone of greater means. “What if Oprah shows up? What if P. Diddy shows up?” he recalled thinking. “I’m not going to be able to buy this piece.”

Should anything happen to hinder Perkins at the auction, he said he and Sebastian had a plan. “I said, ‘Hey, babe, if I have a problem or I pass out, do not worry about me: Keep bidding.’”

Perkins was amazed by the extent of the competition, which drew a total of 22 bidders and took 10 minutes. “It started and it just went nuts,” he said.

In the end, the bidding came down to Perkins vs. someone else in the room — the art adviser Gurr Johns, according to the art reporter Josh Baer —who was bidding on behalf of an unidentified person on the phone.

Thanks for reading The Times.
Subscribe to The Times
“He turns to me at one point and says, ‘I’m not going to stop,’” Perkins said of Johns. “To which I replied, ‘Then I’m going to make you pay.’”

The staggering price — more than double that of a Cézanne in the sale, and more than a Monet and a de Kooning — reflected not only the rarity of Barnes’s image, which was painted in 1976, but also the heightened interest for work by Black artists at a time when the art world has woken up to issues of diversity and made a strong commitment to expanding the canon. The result toppled Barnes’s previous auction record of $550,000, set last November with the sale of his 1978 painting “Ballroom Soul,” also at Christie’s.

Born in 1938 in Durham, N.C., the young Barnes discovered paintings by the old masters at the home of a prominent lawyer where his mother oversaw the household staff (his father was a tobacco company clerk).

Barnes attended North Carolina College of Durham — now North Carolina Central University — on an athletic scholarship and went on to play professional football, but his heart remained in drawing and painting. Physical movement continued to inform his artwork, which often featured kinetic figures. Barnes created five official posters for the 1984 summer Olympic Games in Los Angeles and made commissions for clients like the National Basketball Association, Sylvester Stallone and Kanye West. He died in 2009.

Perkins, who was raised in Jersey City, where his father, an attorney, and his mother, an educator, owned several works by the abstract artist Norman Lewis, said the Barnes painting — which he saw featured on Gaye’s album and “Good Times” — was formative in his artistic consciousness.